I am pleased to be able to say that my concept for a true 360/VR lighting instrument is now fully patented! Issued May 21, 2019, US Patent No. 10,295,888 describes my full process of a "360 Video/Photo Production Light Apparatus."  Just shy of 3 years, I have finally reached the end of the road to patent status. Being my first, what a windy road it was at times. Even went through an initial rejection, which I came to learn is not too uncommon for the process. I learned a lot, and have great respect for what's involved in assuring that an idea is truly original. And the day finally came!  I used to watch these great documentaries by British Historian James Burke, and was reminded of the scene below from one of those documentaries.

So........now what? Well, it's time to take the next step: making it a sellable product. My ultimate hope for this is to license the patent and work with an interested party/parties who have the manufacturing and distribution capabilities. As the 360/VR market is still maturing, an elegant and simple lighting solution is still lacking. The camera tech is evolving rapidly: they are smaller, but have more resolution while using fewer lenses and having less stitching problems. Audio is moving along nicely too: I myself have a great little ambisonic (3D Audio) mic for recording immersive sound along with the immersive video.  But lighting is still relatively ignored, requiring users to resort to various DIY solutions. The CL360 in fact was the result of a DIY solution. My goal is to change that. It’s time for a viable solution to the issue of lighting under the unique circumstances of 360/VR production. 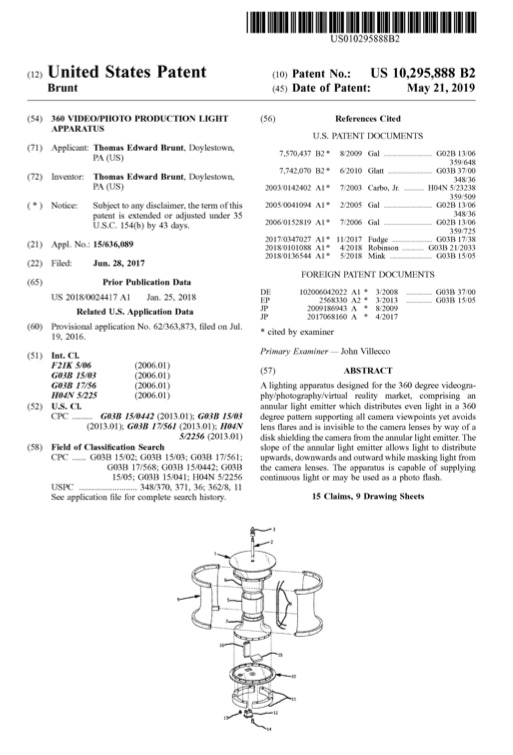 Currently in the building stage is a new prototype design. Improving the form for a sleeker look, shrinking the electronics (thus the size), while still maintaining the concepts illustrated in the patent. It will be a great photo flash/video light suitable for many of the 360 cameras currently on market. Be looking for the next blog post in the coming weeks.

The full patent can be found on the USPTO website.

Updating the markings of all of the prototypes.

Read the story behind the development of the CL360. Click on "The Story" in the main menu above.

Are you reading this and are involved with manufacturing, R & D, distribution or sales of photography or video lighting equipment? As the e-mail address addy says: "let's talk" and work together to bring this needed device into the growing marketplace of 360/VR photo and video production.